On October 19, 2016, Donald Trump at the third and last debate before the USA presidential election, refused to com
mit to acknowledge and respect the official results of these elections. When asked about it by the moderator, the Republican nominee said “I will look at it at the time”. Trump’s statement is extraordinary in the US context and sound sore-losingish. One needs good reasons and strong arguments to demonstrate that an electoral process is flawed.

It is a tradition to accept the result of the election in the USA among the major parties’ candidates. It has become obvious to the point that many political observers and actors have been shocked by Donald Trump’s statement. Extremely interesting, as on December 13, 2000, Al Gore, the then Democrat candidate, eventually conceded presidential election. Article here and video statement there. 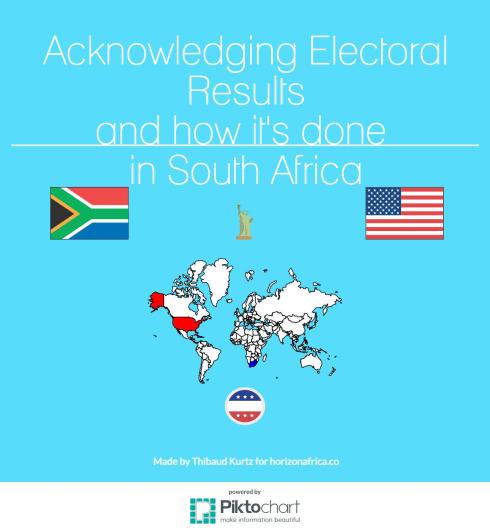 On another side of the Earth, one can read and hear often news about disputed elections with candidates refusing to acknowledge defeat. The aim of this site is also to talk about all the elections and the other things that work well on that continent and not just the “bad” things. Many African countries have been creative regarding how to best deal with this issue and make the electoral processes more acceptable and credible.

In 1998, the newly-freed-from-Apartheid South Africa adopted an electoral act that included an “Electoral Code of Conduct” aiming at creating conditions that are conducive to free and fair elections. This code is legally binding. It puts candidates at risk of being condemned by a tribunal if they do not accept the results or refuse to challenge them in court.

The African Union has then developed a Charter on Democracy, Elections and Governance. It was adopted in 2007 – the year of the terrible electoral crisis in Kenya. By October 2016, 10 states have ratified it. In its article 17, it states that:

“Ensure that there is a binding code of conduct governing legally recognized political stakeholders, government and other political actors prior, during and after elections. The code shall include a commitment by political stakeholders to accept the results of the election or challenge them in through exclusively legal channels”.

Adopting a code does not guarantee to get peaceful elections but it helps especially if this is done through a general a credible and transparent process and where courts can be trusted.

We will keep on looking at shortcomings of the US electoral system and other lessons to learn from African examples.